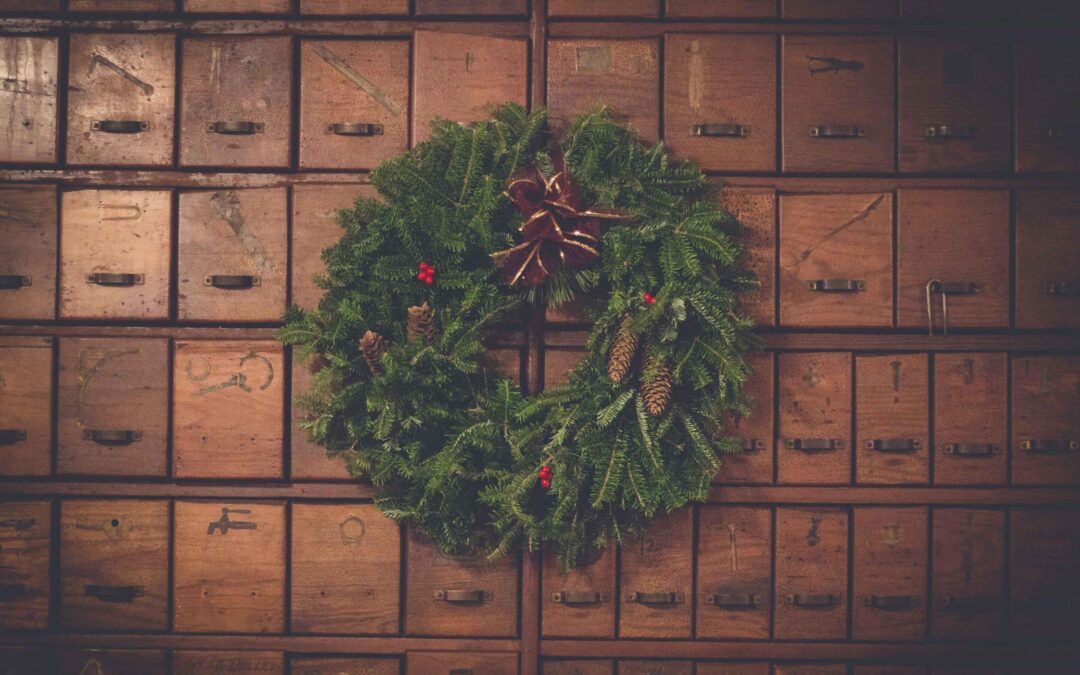 Ever since first hearing the cheery song “Over the River and Through the Woods,” we all likely thought it would be enchanting to ride a sleigh to some exotic, woodsy retreat to celebrate the holidays with our grandparents. The reality for most of us, however, is that we will be visiting family and relatives somewhere in suburbia.

Those living in, or at least planning to spend some time in, Riverside during November and December will probably not have to slip and slide through snow and icy conditions to get around. The Inland Empire boasts pretty nice weather most winters, falling right in line with Southern California’s temperate climate during the holidays.

Riverside and the surrounding area offer a plethora of activities and performances to help you get your holiday groove on this year. Read on for 15 favorite suggestions.

A Christmas Story In-Person Paint and Sip: The Paint Sesh team is putting on a series of holiday-themed painting activities, some in-person and some strictly virtual. This one on December 21 appears intriguing as it features a A Christmas Story movie theme. We’re not sure if there will be a “major award” involved, but paintings could be considered to be “fragile” in nature. The event will be held at the W at Worthington’s in Riverside. So grab a drink or two while you paint, but just be careful not to “poke your eye out” with the blunt end of your brush.

Holidays Around the Globe: Children are going to need to be entertained during the holidays, and adults could use a little bit of help having lots of treats on hand for visitors or to pass out to neighbors. The Holidays Around the Globe baking class offers solutions for both scenarios. This children’s baking class will help them learn about goodies from around the world. The classes, held at the Ysmael Villegas Community Center in Riverside, run 5–7:30 p.m., December 6–15, so there are plenty of options from which to choose.

Wickerd Farm Christmas Trees: If you’ve ever seen the movie Christmas Vacation, you know what perils possibly await if you attempt to go rogue in your hunt for the perfect family tree. But if you still want a much-safer experience of picking out a live fresh tree and bringing it home, then take the family to Wickerd Farm in Menifee. Choose-and-cut Monterey Pines are grown on site, and pre-cut firs are shipped in from Oregon.

Disney’s Festival of Holidays and Merriest Nights: Two celebrations will be ongoing throughout the holidays at the self-proclaimed “Happiest Place on Earth.” Festival of Holidays, which is happening at Disney’s California Adventure Park November 12 through January 9, celebrates multiculturalism. It honors sights and sounds from around the world while recognizing Christmas, Hanukkah, Kwanzaa, and Three Kings Day. Merriest Nights is ticketed separately at Disneyland and provides access to an after-hours party on six different nights. It includes special attractions and entertainment. Some rides also will remain open for further enjoyment later into the California night.

Alton Brown Live: If you’re in search of the perfect recipe for a unique holiday experience, “Alton Brown Live: Beyond the Eats” may be the secret ingredient. Billed as a “culinary variety show,” Brown will entertain via a multitude of mediums, including food, comedy, music, and plain, old-fashioned entertainment. He will be appearing in Riverside on December 12 from 6:30–10:30 p.m. at the Fox Performing Arts Center.

Disney On Ice: If you’re thinking about making a big pre- or post-Christmas splash at home, then Disney On Ice may provide the perfect opportunity to surprise your family. With 10 shows over six days (from December 22–27), this Disney ice-skating phenomenon affords plenty of flexibility for scheduling. There’s even a pair of shows on Christmas Day itself—you know, if you really want to be an all-star family gift-giver. (Disclaimer: Spouses might want to run the Christmas Day plans by their significant others before purchasing!) This year’s program will feature on-skate appearances by the likes of Mickey, Minnie, Miguel, Moana, Elsa, Belle, and many more.

Riverside Philharmonic Holiday Concerts: There are three opportunities to get your classical holiday music groove on as the Riverside Philharmonic presents two main holiday concerts and a family-friendly performance as well. On tap will be traditional favorites such as the main march from The Nutcracker, the “March of Toys” from Babes in Toyland, and Robert Wendel’s “Hanukkah Overture.” In the second half of the show, the philharmonic will be joined by La Sierra Chorale students for sacred music, followed by a guaranteed crowd-pleasing singalong of Christmas carols. Main performances are December 4 at 7:30 p.m. and December 5 at 2 p.m. A family-friendly performance (shorter and no intermission) will be held on December 4 at 2 p.m. Performances will be held at The Box at Fox Entertainment Plaza.

Trans-Siberian Orchestra’s “Christmas Eve and Other Stories”: Full-scale aural and visual overload is on tap, and likely a few tugs at your heartstrings as well, as Trans-Siberian Orchestra brings its holiday feast of the senses to Toyota Arena in Ontario. TSO is marking the 25th anniversary of “Christmas Eve and Other Stories,” its debut album. Fans can expect all the usual embellishments of lasers, smoke, pyrotechnics, incredible lighting, sincere storytelling, and rocked-up classical music, suitable for the whole family. If you’ve never caught any of the band’s extravagant holiday tours, you owe it to yourselves to give it a try. There will be two shows on December 4: a matinee at 3:30 p.m. and an evening performance at 7:30.

Holiday Marketplace: Now in its 33rd year, this fun holiday market is set to feature the work of 55 specially selected artisans and crafters. The marketplace, held indoors, will be at The Grove Community Church (19900 Grove Community Drive, Riverside) on November 5–6. Admittance is free.

Thanksgiving Virtual Holiday Market: Get some of your holiday shopping done early from the comfort of your living room. This virtual holiday sale will feature plenty of gifts in the realms of jewelry, bath and body, home decor, and more. The sale runs November 14–19 at www.chiceventsdc-virtualmarketplace.com.

The 50th Annual Golden Candy Caneland and Craft Faire: The Ehlers Event Center is home to this special event, sponsored by the Buena Park Community Services Department. There will be food and craft booths, games, snow slides, and a visit from a jolly, bearded, overly enthusiastic, red outfit-wearing gentleman claiming to come from a northerly pole—if you catch our drift—to hold court with the kids. The event is going down on December 4 from 10 a.m. to 4 p.m. Be sure to check out the popular Holidays Around the World cultural booths as well.

Bonnes Meres Auxiliary Annual Auction: Titled “A Thrill of Hope,” the annual Bonnes Meres auction kicks off the holiday season with a luncheon, live and silent auctions, and a drawing for prizes. Money raised through ticket sales, auction items, and opportunity ticket sales have paved the way for Bonnes Meres to donate over $2 million to a children’s fund to date. This year’s event will be held at the Redlands Country Club from 9:30 a.m. to 1:30 p.m. For further information, email BonnesMeres@gmail.com.

Christmas Drive-Thru Toy Drive: Looking for an opportunity to share some holiday spirit with underprivileged children in the area? You can easily do so by coasting through the Christmas Drive-Thru Toy Drive in San Bernardino. Sponsored by A Light of Hope Zaragoza Enterprises, in conjunction with CPR Training Center and California Live Scan 4 All, the toy drive will take place on December 4–5 from 10 a.m. to 3 p.m. at the California Live Scan 4 All and Save Lives Training Center parking lot (696 N. D Street, San Bernardino). Simply bring a wrapped present—such as toys, sports equipment, puzzles, books, art supplies, etc.—which will benefit children in Riverside and San Bernardino counties.

Scented candles are extremely popular during the holidays, but we want to issue a reminder that up to 7,500 fires are started each year because of household candles. Please exert extra caution when lighting candles in your apartment, especially in your bedroom. Consider using battery-powered candles or scented spray instead to address all your aroma needs while avoiding any inherent dangers. And if you do decide to use candles, please don’t leave them unattended.

Live Christmas trees, naturally, can also create another fire hazard. If you’ve brought a real tree into your apartment for the holidays, take every precaution to keep it watered so it doesn’t dry out. Take care to keep all open flames, such as candles, away from the branches, and make sure you turn all lights off when you’re not at home. Stay safe and enjoy the holidays!

Riverside and the surrounding area are packed with holiday cheer. Enjoy the activities, shopping, performances, and opportunities to give back, and stay safe.

We’d love to see your holiday fun! If you decorate for the holidays or try out one of the activities above, post a photo on social media, tag us, and use #TisTheSeasonAtAMC.

From all of us at The James Apartments in Riverside, CA,
Happy Holidays!